Transitions are liminal spaces, neither here nor there. Today is the last day of working at Northern College for me, and the first day of my new (trendily portfolio) career. This change is not a sharp

one, because my life’s purpose – getting people to think for themselves and act collectively – hasn’t altered, though the focus of my work may do. No stately vehicle for this next stage of my journey. It feels more like I’m heading down the highway on a fleet of skateboards. And that’s a good feeling.

As the saying goes, it’s been emotional. Seventeen years is a long time in one place, especially for someone who bolted after every few years beforehand – and probably will do the same forevermore. Northern College was a safe haven for me and my son back in 2000 and for many thousands of people since. This is my impressionistic reflexion of those years.

Where else to start than with the students who have been the point of it all over two decades? This is no patronising platitude; although your learning was central to my purpose, the work we did together – and that you went on to do – was always what I was really about. It’s no coincidence that I moved from public health via community work to become an educator: it was a new and very effective vehicle by which I could try to change the world. You have all transformed worlds; you have done the work a thousandfold.

I might not have got the balance right to start with (falling in love didn’t help, a forever love, I’m so glad I did). I quickly figured out that if I was to say anything about equality I’d be a complete hypocrite if I didn’t deeply believe that every student was the equal of every tutor. Not in a hierarchy, perhaps – hierarchies are by definition not equal and it would be disingenuous to deny that power relations were at play, as the Learning for Democracy principles make clear – but equal as thinkers, equal as humans with as much right to dignity as I have.

Several thousand students over ten years of the TeachNorthern programme and many hundreds more during the Community Regeneration and Working with Parents years; an incredible many are still friends (the best) and acquaintances, some have drifted from view, others heartbreakingly lost (as I write, faces swim into view that could each have changed the world). I hope if you are reading this after a longtime that you will come and find me on social media and make yourself known.

I could plaster this blog with photographs from graduations (I’ll limit myself to a couple, I promise), but what is most glorious about adult and community education is that 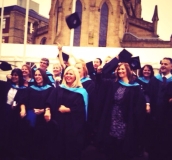 transformation doesn’t have to take the years of a degree course. Sometimes a 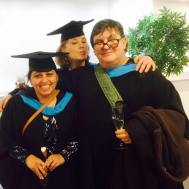 day does it, or even a couple of hours. Or maybe it’s years later that the impact is felt. All graduates, colleagues and critical friends become part of a Community of Praxis, continuing to think, practice and percolate ideas and sometimes it’s years later that soundings come back to me and I know that the work is continuing in its rhizomatic way, burrowing like bluebell shoots under the earth: persistent, subversive and unexpected.

Oh…and the teams. I’ve been fortunate in being part of two incredible teams over the past twenty years. The Community Regeneration team was like nothing I’ve ever experienced; love and challenge in equal measure, friendships that will last for me until time runs out. We were The Matrix. To have a second shot at being in the ideal team was glorious. I hate acronyms but who could resist being part of something as loving, supportive and all-round Thinking Environment as the TeacherEd (TEd) team? I don’t lack healthy cynicism but ask me in ten years’ time and I know we will still be friends. And if I can be greedy, it’s been wonderful to make lasting friendships as part of the Huddersfield Consortium too.

paths might cross again some point in the future, whatever our relationship has been before. We might find ourselves in a new constellation of practice which feels both as comfortable as an old jumper and as challenging as a radical new look. There’s a thought that makes me feel excited about the future.

I’ve always found creativity in the Thinking Environment paradox freedom needs boundaries and it has been an incredible experience to innovate within the increasingly limiting parameters of adult education qualifications (bearing in mind that my first job at Northern College was to write hundreds of Open College credits from scratch). I think we’ve managed to show what’s possible if we look beyond that which we take for granted in education. The innovation we are most known for is digital; a genuine team effort and much of it enshrined in the FAB Projects of 2013-now. Some of the best times over

recent years have been working on projects which blend digital with the pro-social approaches we brought with us from community and public health work. The biggest identity shift of all came for me when my professional identities as public health worker, community development worker and educator swam into focus during my time in India and I realised that my practice was the legacy of all three. It’s helped me shape my ideas for the future, too. 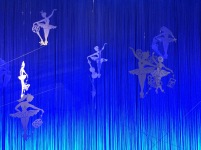 Working on funded projects brought me in touch with a wider network of activists and practitioners and around this time I finally figured out what Twitter was for. It’s been an incredible experience leading to so much humbling and diverse richness for me, to work with thinkers such as the Dancing Princesses, educators from Tutor Voices and other activist networks; dive into unfamiliar and sometimes uncomfortable thinking and begin, with others from different perspectives, to disrupt and decolonize education.

So nearly twenty years later, I have come full circle as a worker-activist and the flow of that is telling me it’s time to leave. I don’t have a sense of leaving anything or anyone ‘behind’. The right people are exactly where they need to be and when the time is right,

we will work, play and laugh together again. I’ve been careful not to mention individuals because so many people have been part of making our time together memorable. But as one of the things I’ve learned at Northern College is to love and be loved, you’ll already know who you are.

Finally, there’s always a soundtrack to my life and there are two songs resonating with me at the moment. One is just about me and it would be a little indulgent to share it here. So this is about us. Enjoy.